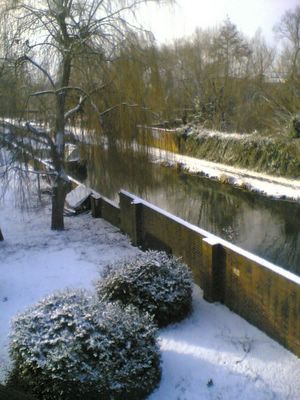 Snow on the canal

Finishing the book proposal - like any bid, it kills me - and realise I don't blog much anymore - well good news is that I have my pulse returning, bad news is that never made it to canary Wharf Sunday for the boat trip - Daffy was harrassed, and it's a long way just to schmooze. Plus Paul was actually out at lunch! This w/e riigby, next w/e Hampshire, then Head of the River Race with pat and Vicky en famille, then Hebrides for Easter, then Barcelona - where Rob is home en masse and I need to try Nick for a room...Oxford snow piccies to follow
Posted by chris at 2/22/2005 01:36:00 PM No comments: 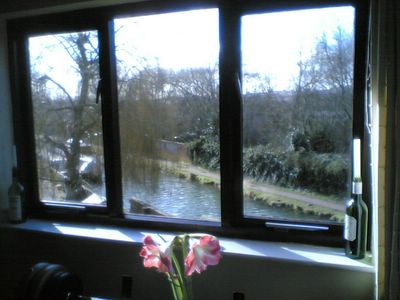 Spring on the Oxford Canal - final days of the triffid 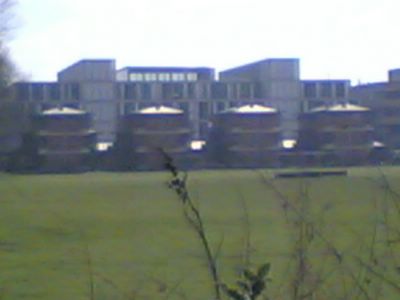 Manor Road building from the Parks

I think it's finally springtime for Marsden -
4 weeks teaching down, 5 to go and we all seem to be enjoying it,
one of my 3 special talks completed, another Tuesday and then in 2 weeks,
four of 8 seminars at PCMLP down and info planned for publishing them,
Cambridge invite secured for 21 March,
Stanhope event planning for April 18th,
Japan booked for last week of May,
Hebrides yomping planned with Greggo,
Barcelona less than 2 months away,
Boat trip in the snow planned with Daffy - daffodils almost out too!
Posted by chris at 2/18/2005 10:40:00 AM No comments:

Daffodils out in Stourbridge yesterday - rolling in the mud trying to kick a rugby ball in a Force 10 northerly! Kids in good form, ignored the cold and enjoyed the snowfall in the afternoon.
I got a call from PITCOM Friday - may be speaking there 23 May after the Election. Also trying to sort out the Sevens weekend with Adam and Wayne, and the cricket at Edgbaston 7 August.
Having some coordination difficulties with Japan - 24 May? Damian is now trying not to go - he's the award holder! But I guess young families make it difficult. Maybe I should have my name on the award?
Dinner with Andreas last night - found a very nice drink called chocolat con cointreau - winter warmer:) He's speaking this afternoon, me next Tuesday 22nd, and I'm giving a little talk to the computer scientists tomorrow, followed by dinner in Hall.
Beats Valentine's! I need to get the book proposal into Hart, too....
Posted by chris at 2/14/2005 08:36:00 AM No comments:

Ellen Macarthur is on Day 70 of her round-the-world trip - and I'm 10 weeks into my struggle to get through the English winter. The sunny days have been in single figures, it's just been terrible (not quite as heroic as she, but...). Now it's warm and cloudy, much better than the horrific first half of December, and that freezing fog weather. Teaching Thursdays and beginning the seminar series has made it much easier, together with the renewed Cambridge saga. I might even restart my social life sometime soon - I put that in the deep freeze at Halloween...
Saw the riigby today - France as awful as when I saw them given a hiding by 'Les Noirs' in November - just as Ellen and I began our dark journey into daylight. England almost as bad...
I spent a good day gardening yesterday - have the rose thorn scars on my nose to prove it! With a lot of pruning and a bit of digging, the garden should be ready for spring. Daffodils are poking up, crocuses (croci?) about to flower.
Opposite, they've started building some flats - earthmovers appeared on the other side of the canal 8am on 1st February - well, it's the first swallow perhaps:)